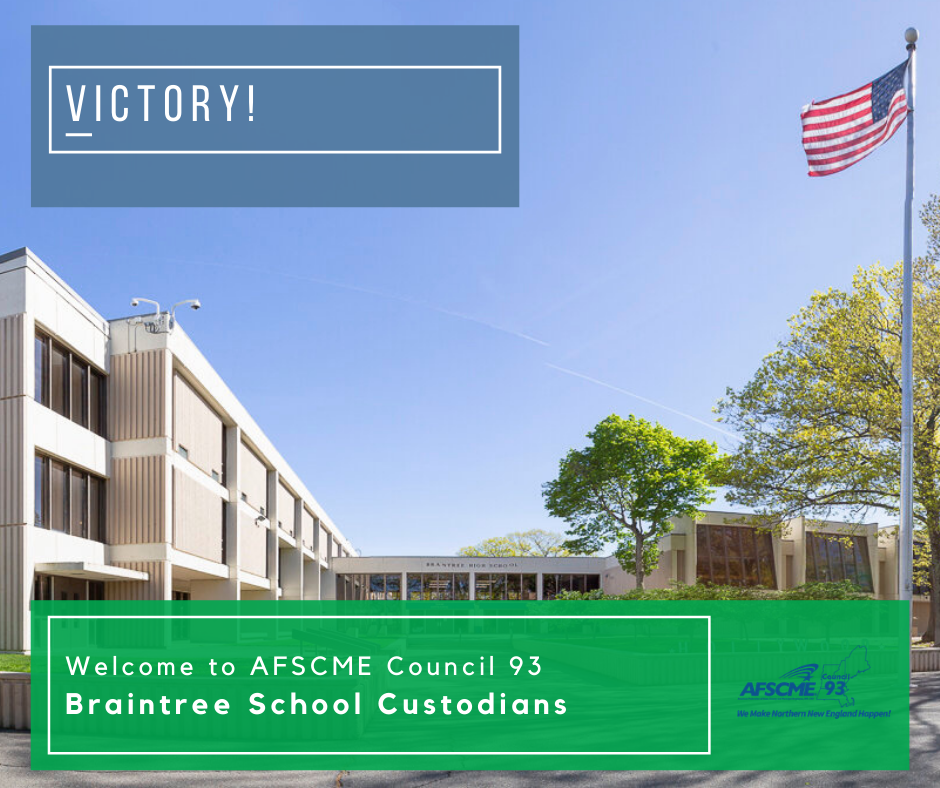 This week thirty-eight custodians in the Braintree Public Schools officially joined Local 1395 after a successful organizing drive spearheaded by Council 93.

Braintree Public School administrators voluntarily recognized Council 93 as the exclusive bargaining agent, after Written Majority Authorization Cards were signed by nearly all of the custodians in September of 2020.

For years, the custodians in the eleven Braintree public school buildings have been an independent association. Facing bullying and harassment from management, member morale had been at an all-time low when the Braintree Custodians decided to make a change and formally join a larger union. After studying other custodial contracts on the South Shore and seeing the level of service AFSCME provided to members of other departments in town and other custodial units, not to mention the gains made at the negotiating table, the custodians approached Council 93 about formally joining AFSCME.

Now represented by Local 1395, the Braintree Custodians are in the process of addressing longstanding workplace issues impacting staffing, overtime, and working conditions with their new Council 93 Staff Representative. Unit leader Jordan Wagner noted that morale has "been renewed knowing we are on the path to improving our working conditions."

Wagner has been impressed with AFSCME stating "we are looking forward to now being a part of AFSCME and the power that comes from being associated with a larger union. We are glad we now have access to seasoned business agents and labor lawyers to handle issues and for collective bargaining."

Council 93 is constantly organizing traditional and non-traditional workplaces in both the public and private sector throughout Northern New England to give working men and women a stronger voice on the job. Once organized, AFSCME Council 93 staff representatives fight for and secure the best wages, benefits and working conditions for our members.

Interested in joining Council 93? Call or email today to speak with our Membership Development Coordinator!